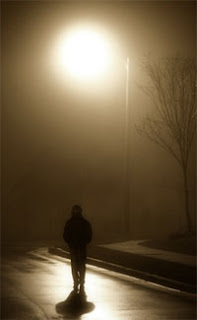 The problem of clarity is not solved by looking where the light is because the surrounding area is dark. So the problem is to strive to increase the light to the greatest degree. That often means looking at ways of thinking about things you have not considered before.

If you approach scripture by a single route, with a single point of view, you are searching under a streetlight. There may be other lights that should be considered, that reveal more or at least different. So the first rule is not to create shadows. Don't assume that your streetlight is the only one worth looking under.

Well after I wrote this I ran into the following juicy example of what I'm talking about. It's titled the tyranny of scripture and is an example of someone who thinks he has all the light. It's sort of a in-your-face counterexample since it is by a fellow who thinks scripture is just fantasy and bigotry. I think he's using a pencil beam and not even the whole streetlight. If you have seven minutes Click Here and don't blame me if you're offended. I warned you ahead of time.
Posted by Ray Schneider at 9:23 AM

Ray,
Where do you put the mystic in your expanding the streetlight metaphor. In your section at the top of the page you talk about the primacy of reason. Where do you put people like St. John of the Cross, Teresa Avila, the Little Flower? Two of them are Doctors of the Church right? Yet rationality is not how they reached truth.

Well, I agree that mystics are not currently on the horizen. It's worth pointing out that St. Teresa Avila in her autobiography says you should consult with learned men and not merely pious ones.
Even mystics must submit to discernment and practice it themselves, so even here I think reason plays a role. Mystics are reacting to an inner light and whether we call that faith or personal revelation or what, it still plays into the light metaphor.
I'll get to mysticism at some point. Thanks for pointing it out.