Another Garden, Another Tree 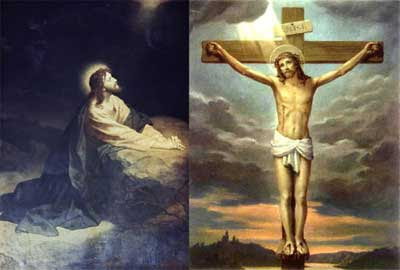 If the first Adam was placed in a garden and disobeyed God, the second Adam came to repair the damage. As St. Paul says in Romans 5:14 Nevertheless, death reigned from the time of Adam to the time of Moses, even over those who did not sin by breaking a command, as did Adam, who was a pattern of the one to come.
Adam was made in the likeness of God, and the second Adam was God Himself come to restore us. 1 Cor 15:45-49 gives — 45 So it is written: "The first man Adam became a living being"; the last Adam, a life-giving spirit. 46 The spiritual did not come first, but the natural, and after that the spiritual. 47 The first man was of the dust of the earth, the second man from heaven. 48 As was the earthly man, so are those who are of the earth; and as is the man from heaven, so also are those who are of heaven. 49 And just as we have borne the likeness of the earthly man, so shall we bear the likeness of the man from heaven.

At the beginning of time one man brought death into the world. At the end of the age, God came to the world as Man and restored Man to union with God even accepting death Himself.
Posted by Ray Schneider at 9:32 AM