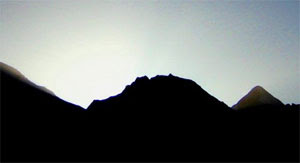 Let's return to Genesis chapter one. To understand any text it is important as Mortimer Adler points out in How to Read a Book to know what kind of text it is. Is it history, poetry, a teaching story (midrash), prophecy, and so forth through all the possible genres one could imagine? It is also important to understand the point of view of the author. In the context of scripture one might expect people to say something like "But the author is God" and that somewhat begs the question. For while God doubtless inspired sacred writings, they are still written down by human authors with human intent. God doesn't turn the author into some sort of robot.
The first verse of Genesis is: In the beginning God created the heavens and the earth. Already we have some key concepts to consider.

The idea that things were not always as they are, that the world had a beginning was not a universal idea. Aristotle, for example, taught that the world was eternal. It is probably hard for us to appreciate how significant the idea of a beginning of the world actually is. We are not really able to imagine nothing or existence before time itself.

God created— is also a concept when we tend to misconstrue. When we create it is to assemble from previously existing things. The whole concept of God is of a being who preexists all that exists and is the root cause of all that exists. That's actually a pretty tall order. God creates then ex nihilo—from nothing in that existentially formative moment, the beginning.

The Heavens and The Earth

With this phrase we leave the modern world and its cosmology of deep space and enter an ancient understanding of the world. The heavens are a place of perfection and the earth a place of imperfection. The world is composed of earth, air, fire and water. Life itself is the breath and the blood. But we are getting ahead of the text.
The second verse reads: Now the earth was formless and empty, darkness was over the surface of the deep, and the Spirit of God was hovering over the waters. Notice that the heavens are dark for light does not yet exist. The world is all the waters, the deep, for the dry land will only come later. Even the sky does not yet exist. We are in an ancient cosmology, one familiar to the author but not to us. We are not in the cosmology of the present day.
Posted by Ray Schneider at 7:26 AM

We have recently made an exciting discovery--three years after writing the wonderfully expanded third edition of How to Read a Book, Mortimer Adler and Charles Van Doren made a series of thirteen 14-minute videos on the art of reading. The videos were produced by Encyclopaedia Britannica. For reasons unknown, sometime after their original publication, these videos were lost.

When we discovered them and how intrinsically edifying they are, we negotiated an agreement with Encyclopaedia Britannica to be the exclusive worldwide agent to make them available.

For those of you who teach, this is great for the classroom.

I cannot over exaggerate how instructive these programs are--we are so sure that you will agree, if you are not completely satisfied, we will refund your donation.

Please go here to see a clip and learn more: