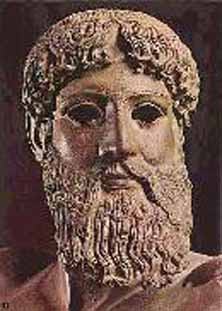 When Adam and Eve are expelled from the Garden, things go down hill fast. Moreover we move from language that is very mythical to language that is transitional. It contains matter of fact material delivered with unusual data, for example: A string of patriarchs who live over 900 years.
It begins with the story of Cain murdering his brother Abel. What lies behind this first primordial murder? After a story of ritual punishment we are given a genealogy of Cain. This is followed by The birth of Seth and a detailed genealogy following the Adam-Seth chain which contains a bizarre sequence of implausible birth and death ages. A sequence of patriarchs starting with Adam live to impossibly long ages ranging from a low of Enoch at 365 when he is taken away by God, to Methusalah who lives to the age of 969. Noah doesn't have children until he is 500. It seems very unlikely that these are accurate accounts of human ages. The arithmetic is carefully confirmed in each case, for example:Genesis 5:12-14 When Kenan had lived 70 years, he became the father of Mahalalel. 13 And after he became the father of Mahalalel, Kenan lived 840 years and had other sons and daughters. 14 Altogether, Kenan lived 910 years, and then he died. Notice the careful confirmation of the arithmetic: 70 + 840 = 910 years. Each of the generations is described this way. Why is that?
One ought always to admit ignorance in matters like this. We simply don't know why these numbers are the way they are. The way numbers are conveyed in Hebrew, like Greek, is with letters standing for numbers and their interpretation demands that you know what the letters mean. One theory I have seen advanced is that the meaning before the Babylonian captivity was different from the meaning after, and the original meaning had been forgotten. In the course of the redaction a later system of interpretation was applied and the careful summations were added to make sure that 1) the numbers added up, and 2) the same thing didn't happen again. Thus these odd and implausible numbers may simply be due to a common human failing, that of forgetting.
Numerology of various sorts has a very long and respectable history. Theomatics is a term used for the process of calculating the numerical values of letters in Hebrew and Greek. It's worth a look if you're interested in calculating 666 for example. In Hebrew mysticism this is called Gematria and is related to Kabbalah which is itself a much misunderstood subject.
What are we to say of these numerical matters? I think we can say that it is a mystery. It may be a mistake. It is probably not literal, and all of these statements are conjectural. The mystery only deepens when we reach Genesis 6:4: The Nephilim were on the earth in those days—and also afterward—when the sons of God went to the daughters of men and had children by them. They were the heroes of old, men of renown. This is one of the reasons why I say that we have not entirely gone beyond the realm of myth here. Who are these Nephilim? and who are the sons of God and the daughters of men? There are many speculations, but again these are only conjecture and reach us out of the dim mists of time and the fog of history turned to myth.
Posted by Ray Schneider at 8:25 AM

Man was created to never die. His body was perfect. Why shouldn't he live for hundreds of years at the beginning? We are extending lives through our improvements in medicine. Adam and his early descendents had no genetic diseases or bodily defects. I don't find the long lives of the early humans implausible at all. It's one of those questions we can ask when we stand before God.

Perhaps, but we don't have any evidence for it. I'm inclined to think it is more likely that there is some confusion in the numbers and dating. Who knows?
The only objection is the one which takes the biblical accounts as blindly literal and I think that simply isn't a credible way to read scripture. There are too many things which one then has to patch over. Maybe I'll be surprised when I stand before God and it is all somehow exactly literally true. But given the number of different languages, the period of time involved (we can't even be sure what some of the Greek words in the New Testament actually mean) I think it is more credible that there has been some confusion.