What are we to make of this? 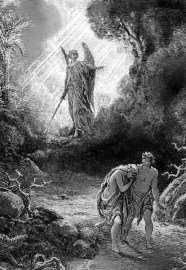 The story of the temptation and disobedience of Adam and Eve in the Garden of Eden is emblematic of the Fall of Man from a state of original bliss in perfect communion with God to a state of relative degradation, condemned to toil and pain and death. These trappings to the story are the accumulation of ages and ages of exegesis.
The story itself has very primitive elements. It is mythic, set in a place of perfection. It is mythic in the sense of animals given sentience and voice in the form of the serpent. The implication being that other animals, less crafty, less disobedient, may also have had voices. God Himself is pictured as a gardener, a shaper of the earth, who shapes even life itself, but also one who is jealous of competition. The last verse we saw said: Genesis 3:22 "And the LORD God said, "The man has now become like one of us, knowing good and evil. He must not be allowed to reach out his hand and take also from the tree of life and eat, and live forever."

What does it mean that "man has now become like one of us ..."? Who are "us"? Why is it a surprise that "man has now become like one of us ..." if man was made to be in the image and likeness of God (Genesis 1:26) then how can it be that God is now concerned? What is "the tree of life" which man had not been forbidden to eat of?
The point is not that I have answers, but that I have many questions which are not answered by any exegesis that I've seen. Eve ate because the fruit was beautiful and wisdom was desired and because the serpent had lied to her. The wisdom was the knowledge of good and evil, i.e. the capacity to discern the true nature of things, hence becoming more godlike, but also more rebellious since to eat was to disobey. What does this tell us about the relationship between obedience to divine command and knowledge? C.S. Lewis in a number of places cites John 7:17 "If any man will do his will, he shall know of the doctrine, whether it be of God, or whether I speak of myself." [King James Version] as a basis for his view of a 'Deep Church' of those who serve God through their obedience. " In following the serpent after wisdom, Adam and Eve doomed themselves to perpetually seeking a lesser wisdom perhaps, than would have been offered had they been obedient. Moreover, the second tree, the tree of life, still awaits us.
Posted by Ray Schneider at 7:34 AM