The End of Bliss 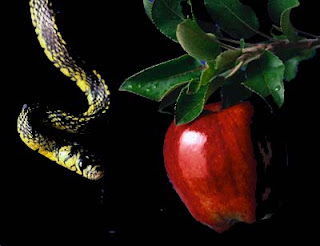 Chapter 2 of Genesis ends on the verse Genesis 2:25 "The man and his wife were both naked, and they felt no shame." — It's probably a good time to point out that the chapter and verse notations as well as any little headings are all very late additions to the bible. They are not original and they are often not very well considered.
Enter a talking serpent. Genesis 3:1 "Now the serpent was more crafty than any of the wild animals the LORD God had made. He said to the woman, "Did God really say, 'You must not eat from any tree in the garden'?" Everyone is used to assuming that the serpent is Satan, but Satan is a much later conceptual entity. The serpent could be anything at all, but one thing he certainly is and that is the personification of disobedience and rebellion. His very first action is to sow doubt.
The precipitous Fall of Man takes place in the span of a single verse (two short sentences), Genesis 3:6 "When the woman saw that the fruit of the tree was good for food and pleasing to the eye, and also desirable for gaining wisdom, she took some and ate it. She also gave some to her husband, who was with her, and he ate it."
The serpent had made two claims, one false and the other true: 1) "You will not surely die" which was false, and 2) "For God knows that when you eat of it your eyes will be opened, and you will be like God, knowing good and evil." which appears to be true. For before they ate of the apple they had no shame at their nakedness, although it is not said if they should have felt shame, that is only an implication and not an assertion.
The Consequences quickly followed — Was is wisdom now that informed them that they were naked? God called to the man but he hid because he was naked. When God asks Adam if he has eaten of the fruit of the tree from which he had been forbidden to eat he compounds his betrayal: Genesis 3:12 "The woman you put here with me—she gave me some fruit from the tree, and I ate it." Thus Adam, Father of the Human Race starts his reign with a double betrayal. He disobeys God, blames his wife, who then blames the serpent.
The Consequences are:
1) the serpent is condemned to slither on the ground,
2) enmity is put between the woman and the serpent and in a verse with several Christian interpretations we are told: Genesis 3:15 "... I will put enmity between you and the woman, and between your offspring and hers; he will crush your head, and you will strike his heel." In Mel Gibson's Passion of the Christ we saw one of the Christian interpretations acted out in another garden. There are three translations, that from the Hebrew, the Greek of the Septuagint (LXX), and from the Latin Vulgate. Each translation has fostered a different interpretation. (See Here) The Hebrew uses a neuter it, the LXX he with Christological implications, and the Vulgate uses she with Mariological implications. It all seems a mystical treatment of a mystical passage.
3) Eve, woman, Life, is condemned to pain in childbirth and submission to her husband (Genesis 3:16),
4) the very ground is cursed and man is condemned to a life of toil. Genesis 3:17 "Because you listened to your wife and ate from the tree about which I commanded you, 'You must not eat of it,' "Cursed is the ground because of you; through painful toil you will eat of it all the days of your life"
5) finally they are cast out of the garden. However the reason given is bizarre: Genesis 3:22 "And the LORD God said, "The man has now become like one of us, knowing good and evil. He must not be allowed to reach out his hand and take also from the tree of life and eat, and live forever."

What are we to make of this?

Posted by Ray Schneider at 5:31 AM