Noah and the Flood 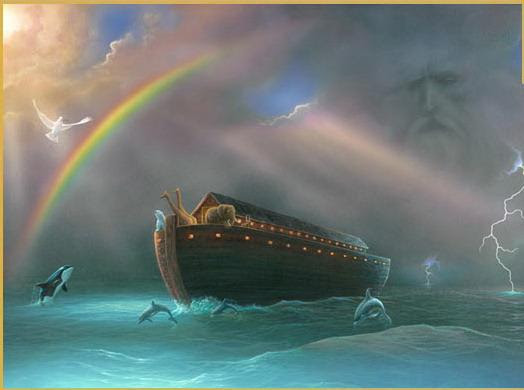 I don't want to belabor the flood story. It is hard to know what to do with it. As an historical account it is hard to credit. As myth it shares a number of significant points of contact with the epic of Gilgamesh which also recounts a flood story and one which closely parallels aspects of the Noah story. This strongly suggests that the two accounts are interdependent, either one influenced the other or both depending on another source we don't have.
In schematic form the story is that God, displeased with the corruption of man finds a righteous man in Noah and tells him to build an ark 300x50x30 cubits (about 450x75x45 feet) with three decks and stock it with all the animals on the earth. The flood comes, everyone dies except Noah and his family, and so forth. After the flood ends and things dry out God makes a covenant with Noah never to do this again and cements it with the rainbow.
The story extends from Genesis Chapter 6 to Chapter 9. There is much support for an ancient flood of epic proportions in the legends of many cultures. Whether these are references to many events or a single cataclysmic event cannot be established. Elements of the account are frankly fantastic and implausible which makes it appear the account was elaborated becoming legendary as it accumulated details in the retelling. It continues to inspire people today and a lively cottage industry exists in recreating the ark, explaining the details, searching Mount Ararat and even Alien Contact.
Posted by Ray Schneider at 8:32 AM