The Promise and Who Will Be Spared? 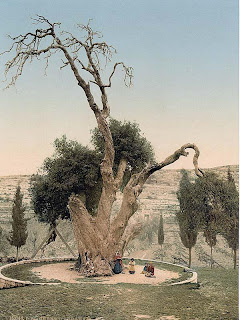 It has been some time since I updated the Bible Surfing blog. I view it as an opportunity to contemplate the scripture and think and reason about it. But in my own journey I've had a few surges in the rapids to negotiate. I had surgery for prostate cancer in June. I call it the "attack of the robots" because it was robotic surgery and as a techie I thought that was pretty neat. Then with all the confusion and chaos in the political arena (see my POLITICAL BLOG) I've been rather distracted.
Returning to Abraham I find Chapter 18 a little bit confusing. Let's see why. In verses 1 through 6 we find the encounter Abraham has with the Lord near the great trees of Mamre. The questions that pop into my head are: 1) How does Abraham so easily recognize the Lord?, and 2) What are the "great trees of Mamre"? I can't really answer the first question. The passage says (verse 2) "Abraham looked up and saw three men standing nearby." and it isn't quite clear if this is the Lord and two men or a separate event of three men just after the Lord has appeared to Abraham. I suppose it could be either. The passage doesn't make it at all clear which. The number three of course, due to later associations, puts me in mind of the Trinity. So are these three all manifestations of the Lord, or are they the Lord and two angels, or is the Lord separate and there are three men or angels associated with the Lord. Since this passage is contiguous with the story of Sodom and Gomorrah we will see more of these "men."
In wondering about the significance of the "trees of Mamre" I did some googling around which is my wont. I am not a deep researcher when I'm thinking about these things. I'm not a biblical scholar. I'm a techie geek scientist who loves writing and poetry and metaphor but not literature research so much. But I did stumble upon this reflection on the tree of Mamre which I think worth reading. It isn't clear why the trees of Mamre are mentioned except perhaps as a land mark. As I read various posts I found that the tree believed to be related at least as a descendant of the tree of Mamre was an oak that is now dead that is itself only some 300 years (another site says it is over 5000 years old) old and so not, of course, the original tree of Mamre. Perhaps it is just that trees are rare in the desert that made it a landmark. There seems to also be traditions linked to the tree: "A long-standing tradition is that the Oak of Abraham will die before the appearance of the Anti-Christ. The oak has been dead since 1996." So there are confusing elements of story about the symbol of the tree.
Verse three tends to make me more comfortable with the idea that there may be a Trinitarian link here — but one has to be careful with translations. Still notice that Abraham extends hospitality of water to wash their feet and rest and goes (verse 6) to have Sarah bake bread and then has a servant kill a choice tender calf. So we have some rather extravagant hospitality and to the request that the Lord stay, the verse says "they (i.e. collectively) answered" which I suppose is a small point, but tends to support the idea that "Lord" is being applied collectively.

Then they ask after Sarah who is in the tent. There is the prophecy that Sarah will have a son. Sarah overhears this and laughs since she and Abraham are old. Despite her age she refers to having a child as a pleasure. I liked that since it is so at odds with our current culture of death which sees children only as burdens and something to be limited or avoided. Finally Sarah laughs at the thought and there is here a somewhat peculiar exchange. The Lord asks why Sarah laughed and Sarah is afraid and lies, saying "I did not laugh" and the Lord corrects her. It's a little detail and a slightly odd one. One might reasonably ask I think, "Why was Sarah afraid?" I don't know the answer. Perhaps it was wrong to correct strangers in her culture. Perhaps she too recognized the Lord and was in awe and concerned that her laugh would be miscontrued. Just a little detail: "Sarah laughed." And of course the prophecy was fulfilled.

Then comes one of the more interesting passages in scripture when Abraham negotiates with God for the survival of Sodom and Gomorrah. The crux of the matter is whether the righteous should suffer for the sins of the rest? It is a matter of justice. Abraham takes the part of a defense attorney pleading for the rights of the righteous not to suffer the same fate as the guilty. He negotiates from fifty righteous down to ten righteous before the Lord goes on. Each time the Lord promises to spare the cities for the sake of the righteous even if there are only ten. The towering lesson here is that the wicked are spared punishment for the sake of the righteous. If there are no righteous men, perhaps all will be destroyed.
Posted by Ray Schneider at 10:15 AM

Gen 17:17 Abraham laughed to himself
An interesting detail in this story - Abraham and Sarah laughing at God's plan to give them a son, yet only Sarah is reprimanded for her expression of disbelief, perhaps because she lied to her husband?