Covenant and the promise ... 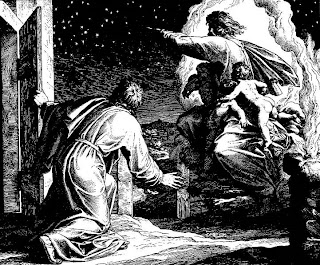 The Lord makes a covenant with Abram in Genesis 15 promising that he will have a son.
13 Then the LORD said to him, "Know for certain that your descendants will be strangers in a country not their own, and they will be enslaved and mistreated four hundred years. 14 But I will punish the nation they serve as slaves, and afterward they will come out with great possessions. 15 You, however, will go to your fathers in peace and be buried at a good old age. 16 In the fourth generation your descendants will come back here, for the sin of the Amorites has not yet reached its full measure."
In addition to the promise of descendants Abram is promised the land. ... "To your descendants I give this land, from the river of Egypt to the great river, the Euphrates- 19 the land of the Kenites, Kenizzites, Kadmonites, 20 Hittites, Perizzites, Rephaites, 21 Amorites, Canaanites, Girgashites and Jebusites."
In chapter 16 we find the story of Hagar, Sarai, Abram's wife's, Egyptian maidservant, who Sarai gives to Abram as a concubine and bears him a son, Ishmael, when he is 86.
The whole story is fascinating if somewhat implausible at least to modern ears. We have no exposure to the marginal life of a herdsman in an arid land. Nor do we have direct experience of the social conventions of that far off time. The importance of heirs and children loomed much larger then perhaps. Abram clearly has a dramatic encounter with God, but the way God's promise will work out remains a mystery for him. Note too the prophecy of the Egyptian bondage and the fact that the Amorites will only be displaced when their sin has reached its full measure.
God is making dramatic and difficult promises to Abram, but note that the promises are in some way contingent on justice. The Israelites will only displace the Amorites when the sin of the Amorites has reached full measure. We have the promise of a true lineage, the prophecy of a four hundred year exile, and a restoration and displacement into a promised land.
This is a retrotext of course. Traditionally Genesis is part of the Torah and tradition says it was authored by Moses. Scholars dispute this today, but note that if it were written by Moses at least the first part of this would be history and not prophecy, although recounted as if it were tradition.
I really don't have a view myself of the authorship or the degree to which Moses was simply retrotelling the known history back into an earlier time as opposed to recounted a story of a tradition, a prophecy now fulfilled and one yet to come. Then again it may be the work of a later author for which all was history. We don't really know, and it really doesn't matter to the story only to its historicity. I is incumbent upon us to reflect on the fact that historicity is not necessarily important, nor is a story false because it is told after the fact instead of before the fact. Events can be interpreted in either way. Ancient texts are difficult enough without demanding that we know everything about their authorship, a demand that is both unreasonable because it is impossible. All we have are the texts and our own conjectures.
Posted by Ray Schneider at 6:22 PM