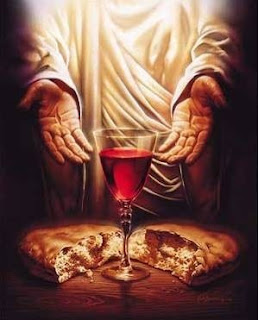 In Genesis 13 Lot and Abram decide to go their separate ways and Lot settles in the Jordan plain and Abram to Canaan which the Lord gives to Abram. Genesis 13:14-16 [14 The LORD said to Abram after Lot had parted from him, "Lift up your eyes from where you are and look north and south, east and west. 15 All the land that you see I will give to you and your offspring forever. 16 I will make your offspring like the dust of the earth, so that if anyone could count the dust, then your offspring could be counted. ]
After this in chapter 14 we find Abram saving Lot who has been carried off by a coalition of four kings who had attacked a combined force of five kings. The kings of Sodom and Gomorrah fled and their cities were looted and Lot and his possessions were also seized because he was living in Sodom.
Abram comes to Lot's rescue with a force of 381 trained men. The small size of this force puts the whole account into some perspective.
In Genesis 14:18-20 we find the mysterious figure of Melchizedek
[ Then Melchizedek king of Salem [i.e. Jerusalem] brought out bread and wine. He was priest of God Most High, 19 and he blessed Abram, saying,
"Blessed be Abram by God Most High,
Creator of heaven and earth.

20 And blessed be God Most High,
who delivered your enemies into your hand."
Then Abram gave him a tenth of everything.]

There are only ten references to Melchizedek in the bible. This one, one in Psalm 110:4, and the eight references in the epistle to the Hebrews.

1 The LORD says to my Lord:
"Sit at my right hand
until I make your enemies
a footstool for your feet."

2 The LORD will extend your mighty scepter from Zion;
you will rule in the midst of your enemies.

3 Your troops will be willing
on your day of battle.
Arrayed in holy majesty,
from the womb of the dawn
you will receive the dew of your youth.

4 The LORD has sworn
and will not change his mind:
"You are a priest forever,
in the order of Melchizedek."

5 The Lord is at your right hand;
he will crush kings on the day of his wrath.

6 He will judge the nations, heaping up the dead
and crushing the rulers of the whole earth.

7 He will drink from a brook beside the way ;
therefore he will lift up his head.

The figure of Melchizedek appears to be eschatological since his name is associated with eternity. The epistle to the Hebrews will associate this mysterious figure with Christ and the sacrifice of bread and wine offered in Jerusalem by Melchizedek becomes a prefigurement of the Eucharist and Christ the eternal high priest.

Posted by Ray Schneider at 7:42 AM