John 1:14-18 A Transition to Speaking of John the Baptist 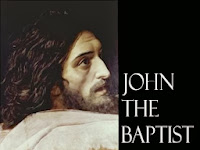 And the Word became flesh and lived among us, and we have seen his glory, the glory as of a father’s only son, full of grace and truth. (John testified to him and cried out, “This was he of whom I said, ‘He who comes after me ranks ahead of me because he was before me.’”)  From his fullness we have all received, grace upon grace.  The law indeed was given through Moses; grace and truth came through Jesus Christ.  No one has ever seen God. It is God the only Son, who is close to the Father’s heart, who has made him known.

The testimony of John the Baptist features here for the first time.  John appears as the one who "prepares the way of the Lord" in all of the gospels.  Here John the Evangelist points out that what John said points to the preexistence of Jesus.  We know from the gospel of Luke that Jesus was not before John in the way of the world.  So to preexist John is to be in existence prior to His human conception.  Here the Evangelist points out that the glory of being God's only son is the source of all the grace and truth in the world.  It is from this grace (the bounty of God's gifts to us) and the truth, i.e. what conforms to reality itself, "I am the Way, the Truth, and the Life" that we know God for He is only seen most clearly through His son.  "When you see me you see the Father" he tells Phillip later in John's gospel.  This short passage is a transition to speaking of John the Baptist.
Posted by Ray Schneider at 9:02 AM