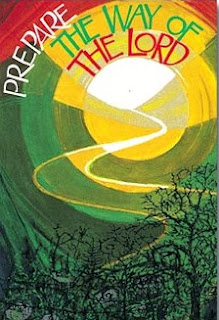 6 There was a man sent from God, whose name was John. 7 He came as a witness to testify to the light, so that all might believe through him. 8 He himself was not the light, but he came to testify to the light. 9 The true light, which enlightens everyone, was coming into the world.
10 He was in the world, and the world came into being through him; yet the world did not know him. 11 He came to what was his own, and his own people did not accept him. 12 But to all who received him, who believed in his name, he gave power to become children of God, 13 who were born, not of blood or of the will of the flesh or of the will of man, but of God.
After introducing the Word, John the Evangelist introduces John the Baptist.  John is the precursor who is to prepare the way of the Lord as foretold in the scriptures.

Isaiah 40: 3 A voice cries out:
“In the wilderness prepare the way of the Lord,
make straight in the desert a highway for our God.

Malachi 3: 1 See, I am sending my messenger to prepare the way before me, and the Lord whom you seek will suddenly come to his temple. The messenger of the covenant in whom you delight—indeed, he is coming, says the Lord of hosts.

Matthew 3: 3 This is the one of whom the prophet Isaiah spoke when he said,

“The voice of one crying out in the wilderness:
‘Prepare the way of the Lord,
make his paths straight.’”

The true light who enters the world is one who preexisted and "... the world came into being through him; ..." a claim to divinity since we know the world came into being through God.  He come incognito into the world, hidden as it were and the people to whom he comes and reveals himself mostly don't receive him.  But those who did receive him received a special gift.  They are given the power to become children of God.  It is a power not a blind gift for they must first receive him through believing in his name and become literally children of God born not of blood or human will or flesh but born of God himself.  This is a gift beyond price and certainly beyond any human merit.